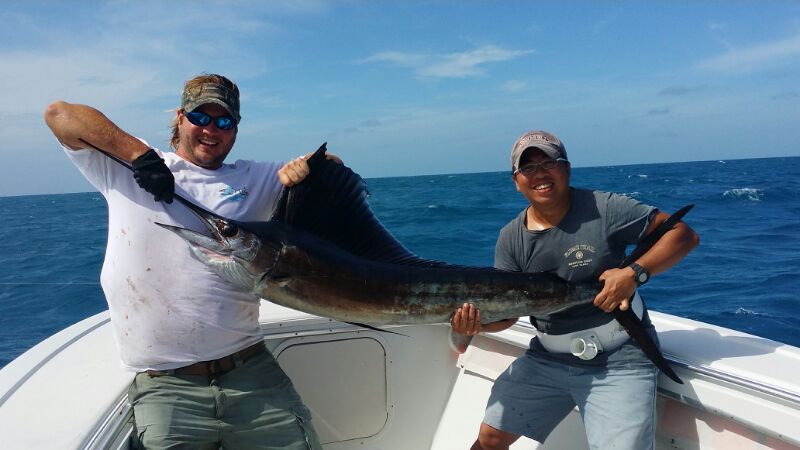 Sailfish are the most prized game fish we catch out here in Key West and two reasons help to explain this.

Firstly, they are visually striking – its pointy bill projecting from the upper jaw, the blue-colored dorsal fin which resembles a ship’s sail (from which the name “sailfish” derives) and the shimmering colors of its body that fade from blue to gray to silver and white. Unsurprisingly, sailfish are also the most popular fish our guests want mounting (sailfish are purely catch and release).

Secondly, sailfish are magnificent fighters. They are the fastest fish in these waters, capable of swimming over 60 miles per hour. With their speed comes agility – they are remarkably acrobatic and will showcase some dazzling runs and jumps once hooked.

Usually weighing between 30-60 pounds and between 6 and 7 feet long, we sometimes catch some monsters over 100 pounds. In rare cases they can even grow upwards of 200 pounds.

When the going is good we’ll also catch and release more than 10 sailfish in a single trip. Although we can never guarantee sailfish, they are one of the most consistent species, especially during the sailfish season which runs from November thru April in Key West (they can be found year-round, but the winter months offer the best opportunity). Keep in mind that water temperatures and the migration patterns of bait fish can have a large effect on sailfish conditions.

Sailfish follow the bait fish, in particular pilchards and ballyhoo. When inshore water temperatures drop the bait fish will seek the warmer waters of the reef. Sailfish will track them and wait around the reef edges to feed.

We use light tackle when targeting sailfish with the line weighing between 12 and 20 pounds. With such little drag on the line, sailfish are also a great challenge for the kids!

Typically, we will look for sailfish just 3-5 miles offshore. One of our favorite spots is by the edge of reefs in anything from 20’ to 200’ of water.

Trolling works well with live bait (or fresh dead bait) hooked up on the line. They are rigged in a way that keeps the bait just below the water’s surface.

We also throw out a net of live bait (often ballyhoo caught on the way out). All the thrashing and splashing near the surface will draw in the charging sailfish. Their mode of attack is to stun their prey with their pointy bills and then return quickly to feed. Once the sailfish pop up near the surface, using live bait or lures on the line will work well.

Guests are often surprised that sight fishing is one of the most effective sailfish tactics. In and around the reefs they can be swimming in water depth of just 20’. You can literally spot them from the boat and throw out live baits in their direction. It sounds overly simple but it’s effective!

When multiple guests are on board, one of our favorite methods is kite fishing. This is exactly what it sounds like! We suspend the bait from specialized fishing kites which are hoisted into the air above the boat. With several kites, each angler can take control of a rod – it’s the most exciting group-friendly method and is particularly effective with sailfish.

When targeting sailfish other fish we tend to land include tuna, wahoo and occasionally shark. 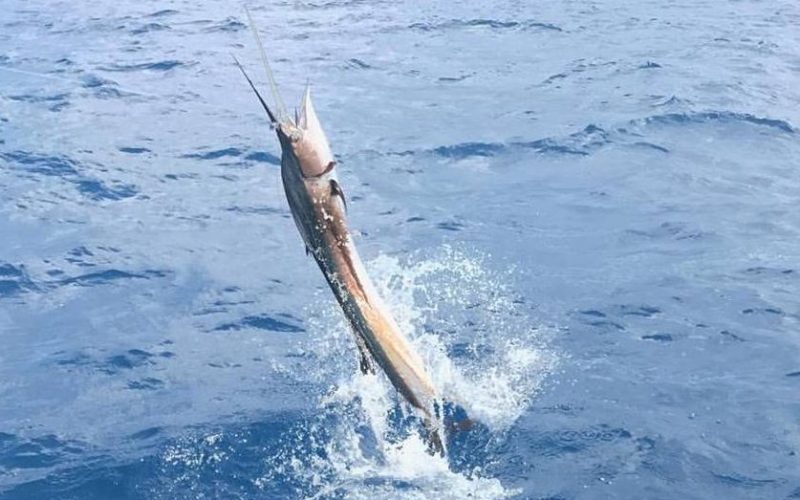 When Catching a Sailfish

Powerful and agile, sailfish can put on short bursts of over 60 mph. When you hook one, you will definitely know about it. Due to the long and hard bill on the sailfish, you may have to pull hard several times to make sure the hook has sunk in properly.

On light tackle you will really be able to feel the power of the sailfish. It can be a physical encounter but a fun one. You should allow the sailfish to make its spectacular runs and jumps. This will tire it out and eventually you can bring it up for catch and release.