Fishing for Shark in Key West – Not Quite Like the Movies 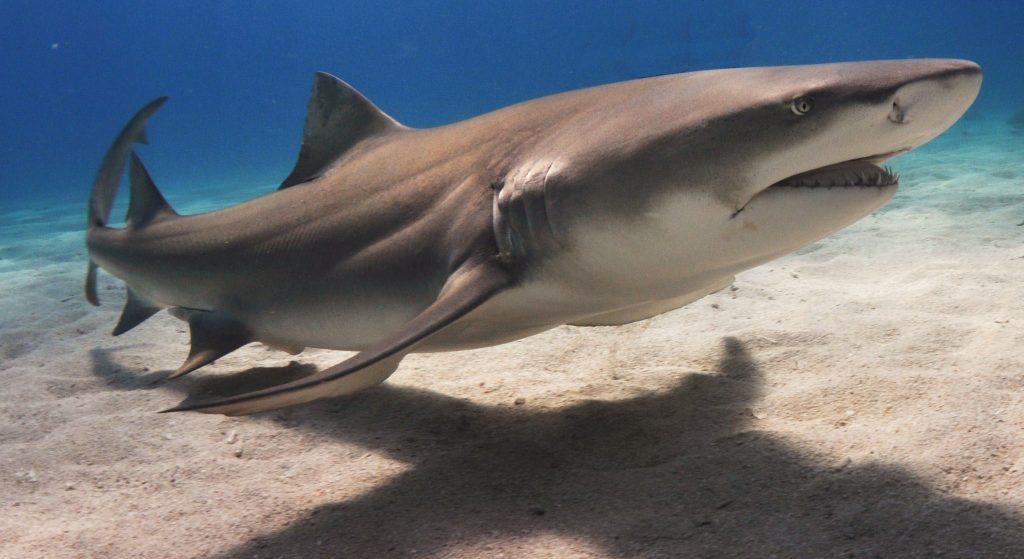 Jaws, the famous movie franchise about bloodthirsty Great Whites who stop at nothing to terrorize (often young and naive) humans, has faced criticism from marine biologists over its inaccurate portrayal of sharks’ relationship with humans.

For us fishing charter Captains the legacy is double-edged. Part of the attraction and mystique of shark fishing is the sense of danger and risk that comes with tackling the ocean’s apex predator. They truly are powerful creatures with unmatched strength.

On the other hand, shark fishing doesn’t quite go down as it happens in the movies (probably a good thing!). For starters, we can fish for shark in under 15 feet of water (even under 5 feet) and we still have to bait the sharks – they haven’t yet taken a bite out of the boat trying to feed on me or the guests.

Sharks can be caught in deep water offshore or in the flats and near shore reefs. The best shark fishing is probably done in shallow waters where you can undertake sight fishing (looking through the water for the target fish). When it comes to shark fishing, we are often on the lookout for moving water – the edge of flats and channels are productive places.

What types of shark will we catch?

The are several species of shark we can target around Key West. The most common varieties are blacktip, lemon, bonnet, nurse and bull shark. Slightly less common but still attainable are tiger, hammerhead and mako sharks.

Sharks will generally weigh in at over 100 pounds and average around 6 feet in length. Catches over 200 pounds are quite frequent. If you’re lucky we might be able to reel in a 10 foot shark in the 400 – 500 pound region.

Most species of shark are hunt alone although lemon sharks, in particular, are found in schools. Even though they hunt separately, it’s still quite common to attract more than one shark at a time to the boat. You are literally surrounded by sharks! 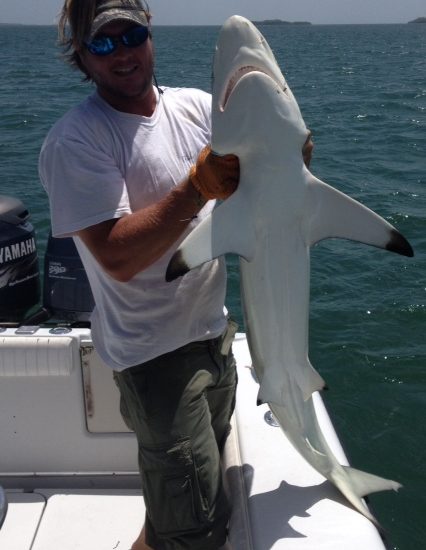 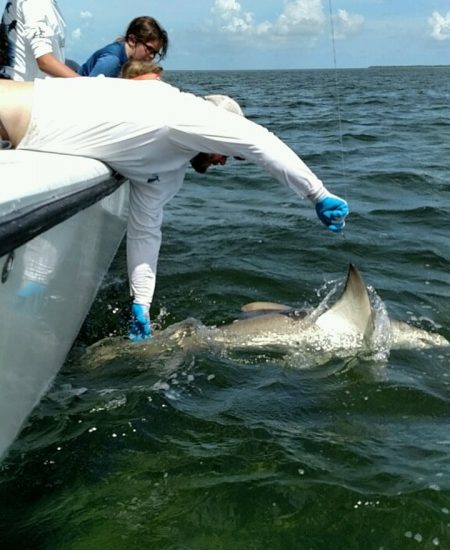 We fish for shark with a surprisingly light tackle (another departure from the movies), around 20 pounds or so although we are careful to match the equipment with the shark we are targeting for a better experience. Using tackle that’s too heavy will prove tiring, especially since the battle will last from 20 minutes to over an hour.

Fisherman have been experimenting (with some success) with flies and lures, but fresh bait still work best for enticing shark. They are also quite fussy feeders so fresh means fresh, not frozen. We keep the bait in brine to keep it fresh and bloody.

The benefit of fishing in shallow water is definitely visual – you can witness the shark’s powerful runs, turns, jumps and twists through the water.

If you want to target shark specifically then Key West is the place to be – our shark catching ratio usually outstrips that of other game fish. A half day fishing trip will lead to around 4 catching opportunities. The shark’s keen sense of smell brings them quickly to the boat which leaves more time for fishing.

Sharks are special fish and shark fishing is a special activity – we want to preserve the specialness for future generations. As a result, all shark fishing in Key West is catch and release.

We pull the shark up near to the boat, but not in the boat. We do our best to provide a memorable photo opportunity and proof that you really did conquer the baddest fish in the sea!
To minimize the damage to the sharks, we employ special hooks (circle or thin wire). We do all we can to ensure no harm comes to the shark.